It is like being back in Spain but without D2 (my daughter Liz) Lying in bed, wondering what the day will  bring, how I will feel by the end of another day on trek, except this is day one in Nepal. I worry about the afternoon trek description “3 hours steep ascent”

My sticks and boots are standing in the corner, the blister pads are ready.

Vegemite and toast for breakfast and I’m ready, well as ready as I will ever be! Slow steps, small steps……

It’s no secret I am scared of heights, particularly when I am travelling in a car. Well, let me tell you I have found a miracle cure! All it took was one  ride from Kathmandu to Pokhara on a windy mountain road, in a car where the only person who had a seal belt was the driver, who talked incessantly on the phone while driving one-handed on the wrong side of the road, passing a truck and negotiating a steep curve all the while honking his horn. This was presumably to let any oncoming traffic know that he was coming round the mountain on their side. At that moment all thoughts of how high up the mountain I was completely disappeared!

24 hours ago I was sitting in the comfort and quiet peace  of the airport lounge at Perth Airport, enjoying a skinny latte and watching The Crown on Netflix on my smart phone.
A plane trip is a plane trip, but I was  very excited to see Mt Everest out of the window, not so excited to see the smog over Kathmandu.

Quick note to the guy on the Nepal  forum who said it takes about 15 minutes to get through the visa line, perhaps if you are first off the plane, sprint through the immigration hall and get to the only immigration person who doesn’t  move as if they are working at high altitude. For the rest of us, about an hour! I had been busy congratulating myself because I had Nepalese Rupees at the ready, but it turns out their country’s currency is not acceptable so I had to scramble through my bag trying to find a combination of Singapore and Australian dollars to pay for my visa.

Off to the luggage carousel, waiting, waiting, waiting…..and after a while just a group of us watching a lonely backpack go round and round. An American guy went off to see if he could find out where our luggage was, literally fell over a pile of Priority luggage which had been taken off and put in a pile in front of another carousel!

Luckily the rest of immigration was uneventful and I made my way outside…..yep, I’m in another country. The smog , the smell, “Carry your bags Madame”, people jostling,taxi drivers offering Namaste and a “very cheap ride Madame”, horns blaring,  a mass of waving  names, Beryl Mahew caught my eye, I wonder who Beryl was, where she came from, what she was doing in Nepal? And there was my sign, Mrs Patricia Anderson, and I was shaking hands with Vision who was to be my porter, a golden scarf wound around my neck to welcome me to Nepal and  bundled into a car with no seat belts except for the driver. And there we were, in the middle of a cacophony of swerving cars all trying to funnel out of the airport through the one car entrance.

We had an hour’s drive through Kathmandu, then into the mountains for 5 hours during which time every tooth rattled, every bone jarred, my bum bounced and my bladder was given such a thorough shaking that I  eventually was forced to use the toilet at the local equivalent of a truck stop. All I will say about that is I really do need to work on my squats, anything else would be too indelicate! 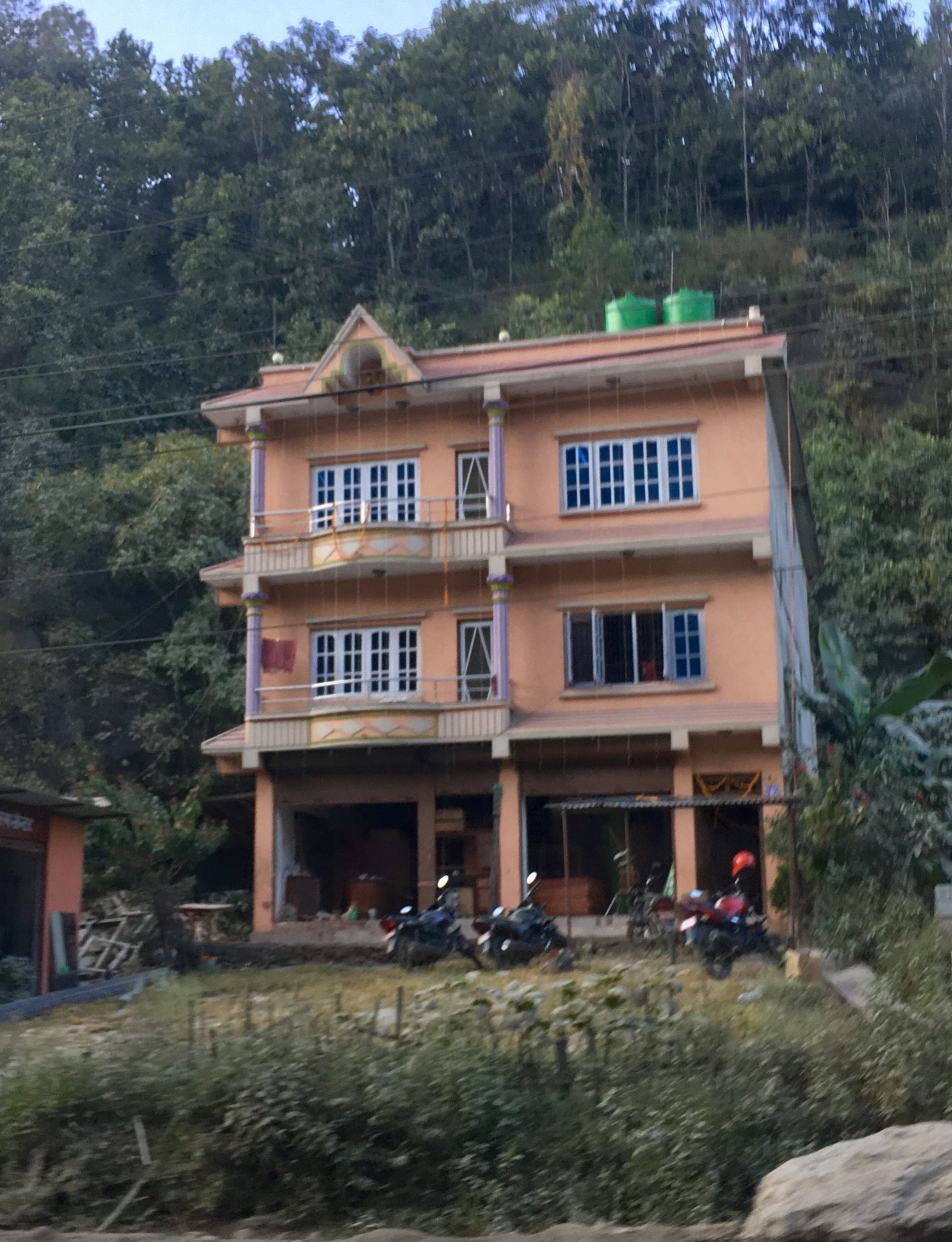 I had a tea of delicious potato samosas and sickeningly sweet deep fried pretzel and according to Vision was charged way too much by the shop keeper, who apparently was a bad,  bad man! 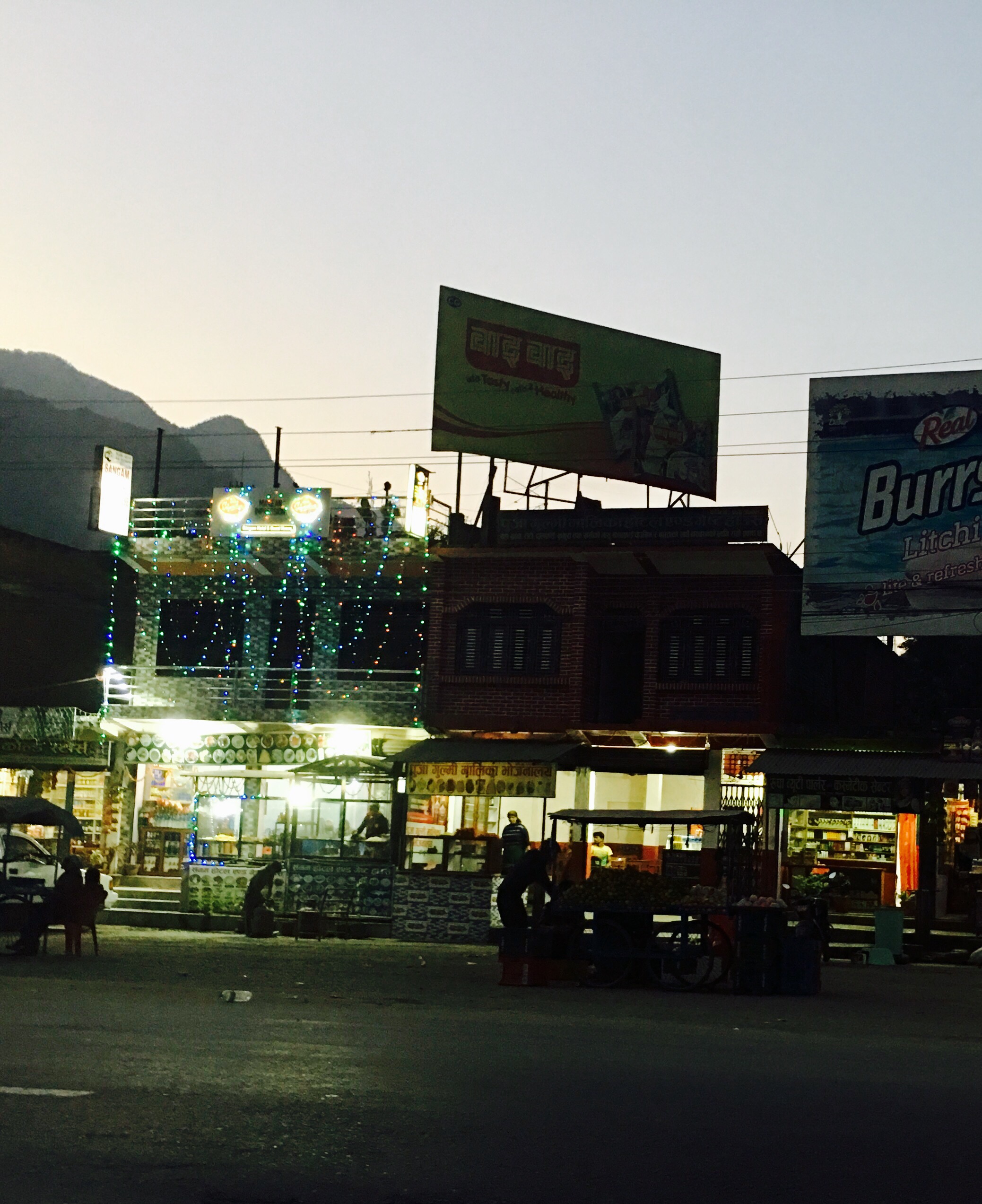 And now I am sitting in the lounge of the Mountain View Hotel in Pokhara, sipping my Marsala tea. I love travel!

When I travel I tend to just launch into whatever lies ahead . Over the years I have come to realise that my trekking adventures are based on two philosophies. The first  is ‘slow steps, small steps and you will get there’ I learnt this when I   was doing my first ever trek, to Everest Base Camp. This trek in itself is a case in point and supports my opening premise….why do a few gentle days on the Bibbulmun for example when you can trek to the base camp of the highest mountain the world?  Just throw yourself into and see if you can do this trekking thing.

When I started Everest Base Camp trek, every morning I would watch my fellow trekkers disappear  into the distance,chattering happily, while I struggled on with which ever guide was assigned to cajole me to the next stopping point. One of them, a gentle soul, would say to me every day “Slow steps, small steps madame and you will get there” Each morning I would look up into mountains at my day’s trek and think “I’ll never get there”. And then at some stage I realised I had stopped thinking that,  I moved  to thinking “I wonder how long it will take me to get there”.

I have taken that with me on all my subsequent treks. Slow steps, small steps and  I’ll get there.  Not to finish is not an option for me. I may be tired, sore, pissed off or just totally over it, but I never consider giving up. When it was 3 o’clock in the afternoon and I was standing at the bottom of mountain track in the Himalayas  that wound endlessly to my lodge for the night; when I sat  by the side of a motorway in Spain crying because the blisters on my feet were so big and angry  I could barely walk ; when I lay in bed in Astorga in Spain one night, wondering how I was going to keep going, it never occurred to me to stop. I had a day off, went to the medical centre and had my feet checked, took a bus ride for one section and just kept going.

For this trek in Nepal I undoubtedly could have trained more, bought my boots earlier and worn them in more, lost some weight, any number of ‘should haves or could haves’ But I will go and catch up with my  trekking friend and her family , experience the hustle and bustle, the sights and sounds of Kathmandu, enjoy peace and majesty of the Himalayas, relive the experience of Nepalese toilets which I have pushed to the back of  my mind,  and no doubt be sore, tired and pissed off at some point!! But  I will do it and  will love it because it makes me feel better about myself

Because my second philosophy, s0 eloquently phrased by Sonny in one my favourite movies ever, The Best Exotic Marigold Hotel, pretty much sums up all my trekking experiences.

“Everything will be all right in the end… if it’s not all right then it’s not yet the end.”