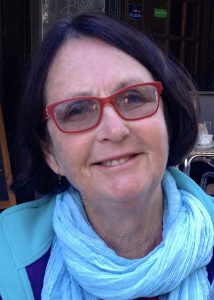 I live in Geraldton on the Mid-West coast of Australia. I began blogging on a visit to Spain and France with my husband in 2013 and have continued blogging in different forms.

My love of trekking began in my later years when a friend suggested that the thing I wanted to do most in life was the Everest Base Camp trek. I was so astounded by this suggestion  (I don’t think it would have made the top 1000 things on my Bucket List)  that my immediate reaction was “Sure, of course I would love to.”   I don’t know how it happened but somehow the suggestion became reality, and in 2009 my friend, daughter and I joined a group led by Richard from Safe Journeys and trekked to Everest Base Camp. I know this sounds very cliched, but it absolutely changed my life and how I viewed myself.

Since then I have done a trek in Thailand, walked Hadrian’s Wall, followed the Camino in Spain and trekked the final two days of the Shikoku trek in Japan with my my daughter who did the whole trek, 1200kms!!

Why do I do it? I’m not sure really. I never train as much as I should and there are always times when I am sore and wonder why on earth I am putting my body through this. I think what I love is finding that inner strength that you never knew you had, that strength that tells you to get up from the side of the road where you were crying because your blisters were so big, and take the next step…and then the next one and the next one.

I am excited to be doing Camino again this year with two of my daughters, I have unfinished business there. It is a passion of mine to share the Camino experience with women out there who think they can’t do it.  I truly believe that anyone can do it. And believe my, it will change your life in ways you can never imagine!