What better day than Easter Monday to try out the new pop-up restaurant in the neighbourhood, El Balcón? Word has it that it is pretty good but you don’t know how long these pop-up  places last. It turned out to be one of these places where you ‘cook your own.’  Much like those steakhouses  which were so popular in the 70’s where you chose and cooked your own steak, until people realised it was much cheaper to chuck a steak on the barbie at home.

The decor could be best described as ‘faux Bali’ but we were lucky enough to get the best table, overlooking the ocean.

The menu was limited, sourdough pancakes with berries and yoghurt. However the ingredients were mostly fresh, the sourdough starter  activated overnight, the yoghurt home made,  but I suspect the berries were frozen. However given the present difficulties in sourcing fresh food this can be forgiven. 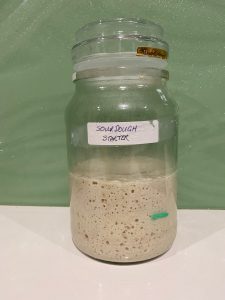 The staff were friendly, the meal nicely presented, although the 1970’s crockery somewhat dated.  The chef and the barista worked well as a team to present a delicious meal accompanied by freshly made spinach and pineapple water and hot coffee. 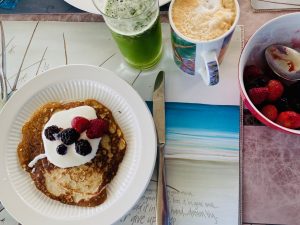 Overall it was a pleasant way to spend Easter Monday morning. I would love to return but have found out since that El Balcón has closed its doors, no doubt another casualty of the time. 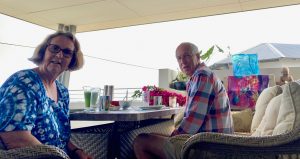 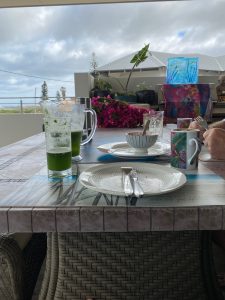