Ernest Miller Hemingway. Papa Hemingway, a  legendary  carouser and drinker, a far-flung traveller, a lover and a fighter. Author of iconic 20th Century novels such as A Farewell  to Arms, For Whom the Bell Tolls and The Old Man and the Sea. 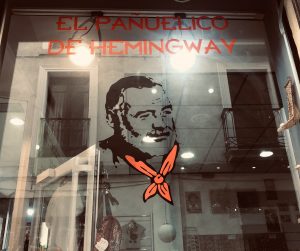 Hemingway journeyed to Pamplona on nine occasions, the most prolific burst between 1923 and 1927, when he visited every year. Each time he came for San Fermín, the city’s blood-soaked fiesta of bullfighting and brutality, drink and song, where the reckless run with angry bulls who are doomed to die with honour in the bullring at the end of each day. I wonder how the bulls feel. 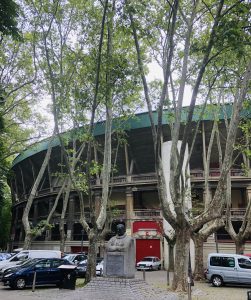 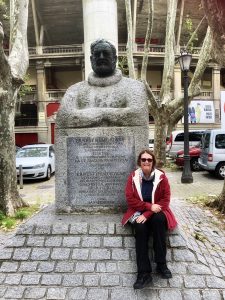 Papa never ran with the bulls because of shrapnel in his legs,  received during World War I when he was working as an ambulance driver in the Italian trenches.

50 years after his death, Hemingway’s grandson John did what his grandfather never accomplished. 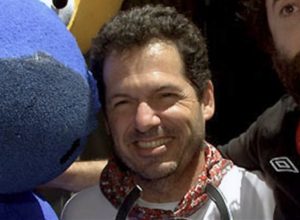 He was 11 months old when on the week of San Fermín in 1961, his grandfather stood on the porch of his home, put a rifle in his mouth and pulled the trigger.

Pamplona, it’s cafes and bars and personalities feature widely in Hemingway’s novels, particularly The Sun Also Rises, his first novel.  The characters are based loosely on the bohemian set that he spent his time with, often in Café Iruña and Bar Gaucho. 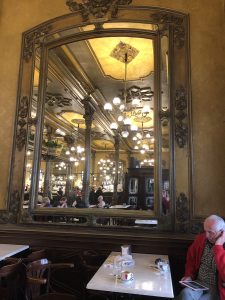 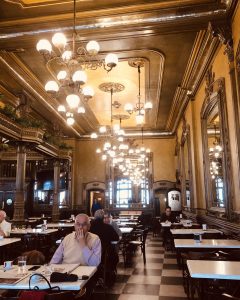 The black-and-white tiled floor is scuffed by decades of scraping chair-legs, high -heeled shoes of local matrons sipping their morning coffee and more recently the boots of Pilgrims eager to see what the fuss is about. 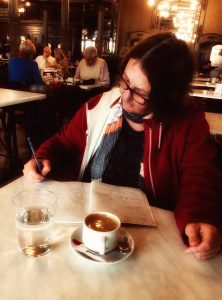 Cafe Iruña looks out on the heart of the city, Plaza del Castillo 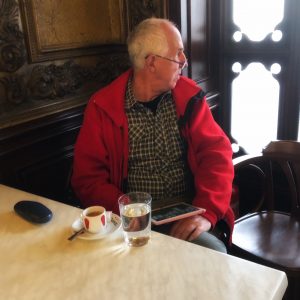 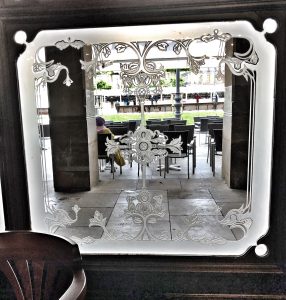 Next door is a bar which used to be the smoking area of the cafe, the 21st Century has caught up with Pamplona and no smoking is allowed in cafes and restaurants. There is apparently a statue of Papa in here, but I never found it open. 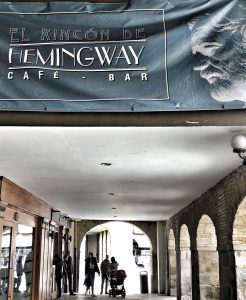 On one corner  is the Grand Old Lady of the plaza, Hotel Gran Perla. Hemingway always stayed there in the same suite that now bears his name, and is almost impossible to book. 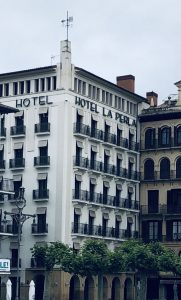 We had some drinks and pintxos in the Gaucho Bar,  on of the many bars Hemingway frequented. 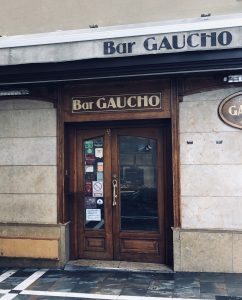 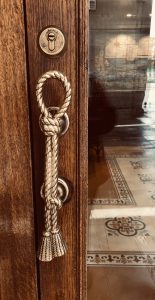 The pintxos are arranged in a tempting line along the bar and you choose whatever you fancy. These were pork cheeks on the right and something with mushrooms and eggs on the left. 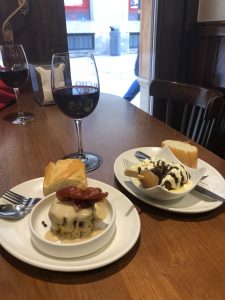 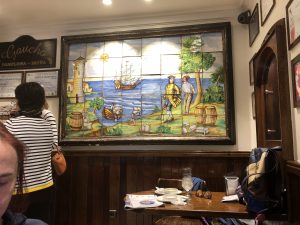 I’m sure Hemingway can be found in many more nooks and crannies , looking for Papa was one of the things I loved most about Pamplona.